Houston, Texas (May 6, 2019) – The Houston Dynamo | Dash Youth Soccer Club (HDDY), a nationally recognized premier soccer club for boys / girls is excited to announce that Sandy Gbandi has joined the club.  Sandy joins the coaching staff having coached for the Texans Soccer Club from 2016 - 2019 and will be based in the Humble / Atascocita geographic areas of the club.  Sandy is married to Wilmary Echandy and has two children (Aleah - age 7; Marcellus - age 3).

"I'm looking forward to the opportunity that the Dynamo | Dash Youth Soccer Club and Don Gemmell is providing for my family. I am very excited to start working with the coaching staff and players in the above communities both on and off the field and help further their personal soccer development."  Sandy Gbandi, Dynamo | Dash Staff Coach. 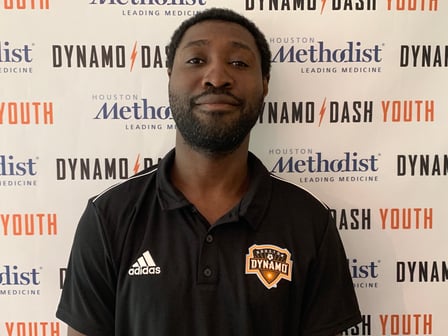 "I would like to welcome Sandy and his family to our HDDY soccer club, we are excited to have him join our team.  Sandy brings with him extensive experience as a professional soccer player in addition to being involved with the Houston youth soccer environment for the past three years.  Having coached in the north part of Houston, he'll be a great addition to the team to support our 2019-20 expansion plans."  Don Gemmell, Technical Director, Houston Dynamo | Youth Soccer Club.