The Girls Academy launched a separate, aspirational competition to add additional quality competition for the most competitive clubs in the GA. Qualification was a reward for a consistent commitment to player development and overall success.

All six (6) Dash teams qualified for the prestigious event with the following groups highlighting the event:

"Overall the Champions League event was a great experience and a very good chance to showcase your skills in front of coaches," said Madison Taylor, 2007 Girls Academy. "The environment was very intense in a positive way.  I have never had a chance to truly know how it feels being tied in overtime and having to go to penalty kicks or the feeling of winning after a really competitive game that decides if you move on in the event. As far as the exposure, I thinks it’s really good, even though I'm pretty young.  It gives you motivation to go out and play like no one has seen you before. After the trip I couldn’t stop talking about it, and looking back and realizing how much fun I had."

"Had a great time at the Girls Academy Champions League event in Bradenton, Florida last week.  There was a lot of great soccer played by some of the most talented teams in the country, " said Bo Littleton, 2005 Parent. "The girls had a great time and the fields were in terrific shape.  We were very impressed with the amount of college exposure at each game by top NCAA Div. I schools.  This was a fantastic event!"
"The Girls Academy Champions League event provided an elite environment for the players. The competitive format, facilities, organization and execution of the event was excellent," said Marcus Watt, Girls Academy Staff Coach. 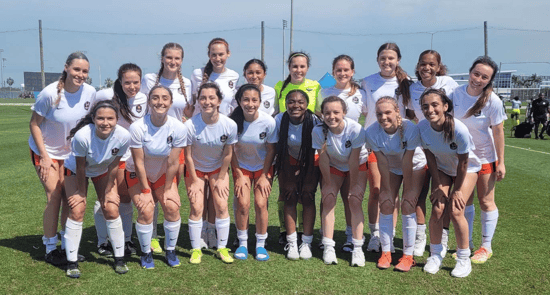