Dynamo | Dash Youth is proud to congratulate the 25 players that took part in the first-ever Houston Dash Senior Recognition event this past Sunday at Aveva Stadium. The Class of 2021 is highlighted by commitments to 12 NCAA Division I schools, as well as additional signings at powerhouse Division II, III, and NAIA institutions.

"We are extremely proud of these players that have worked exceptionally hard on and off the field to complete the recruitment process and solidify their college choices,” said Girls Academy Director, Mark Gibbs. “We wish them all the success and look forward to following them in their future academic and athletic endeavors at their respective schools."

Chris Canetti, President of the Houston World Cup 2026 Bid Committee, emceed the event, with Houston Dash Head Coach, James Clarkson, and goalkeeper, Jane Campbell, presenting awards. Campbell, also a member of the U.S. Women’s National Team and a former college standout at Stanford University, offered insight and advice for the graduating seniors as they prepare for life as a student-athlete and beyond.

"Playing for the Dash has been an amazing journey because I’ve been with the club since the start,” said midfielder Sydnie Thibodaux, who has committed to Auburn University for the fall. “This club has not only made me a better player on the field but a better person overall. I couldn’t be more grateful to have been a part of not only the club itself but the community that comes with it."

The club continues to lead the Houston area in prospective student-athletes committed to collegiate soccer programs. Since 2017, over 200 players from both the girls’ and boys’ programs are continuing their careers collegiately and 34 players are involved in their national team programs. The Dash Girls Academy is the only program in the area to provide direct access to the professional ranks as the affiliate of the NWSL’s Houston Dash. 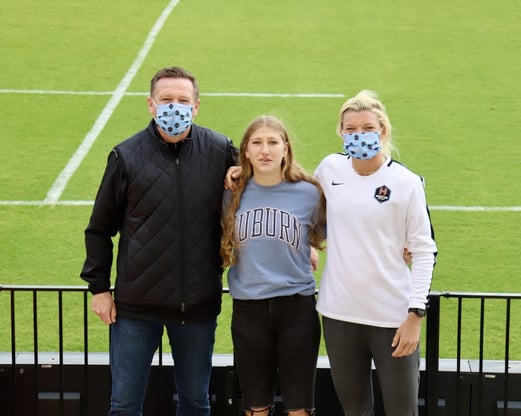