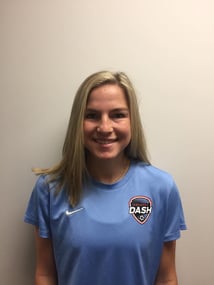 Dash U17’s Jenna Trauffler and the road to recovery......

While the rest of the U-17 Houston Dash Development Academy team travelled to San Diego, California for the DA Showcase, Jenna Trauffler stayed home to continue her rehabilitation.

Last September, Trauffler entered the season with high hopes. After spending more than 10 years at the club from the recreational to the competitive level, she received a call up to the DA team to compete in the inaugural Girls’ DA league season. She considered it a tremendous process in her career, and was eager to be a part of it.

“We just switched to DA from ECNL, so there were a lot of big changes,” Trauffler said. “I was just excited to be playing with the same competition, but at a new level of playing. Everything was kind of progressing a lot more. The competition was getting better and better each year.”

Houston Dash didn’t have the best start as its first victory only came at the ninth game of the season, but Trauffler, a sophomore centerback, enjoyed her life at the new level. She started in every match and was contacted by a Wisconsin recruiter for a possible scholarship. Her eyes were set for the three-game College Showcase tournament in Lakewood Ranch, Florida in December, where she would have a chance to impress in front of more than 300 college coaches.

In a flash, her season and her collegiate recruitment dashed away tragically.

A week after helping the Dash securing their first win of the season, Trauffler started her tenth consecutive match against Solar Soccer Club in Denton, Texas. Midway through the first half, Trauffler rushed out to take on an opposing attacker which should have ended with a routine tackle.

That routine tackle became eccentric when she heard a pop sound coming from her left knee.

“I was playing with this forward from Solar,” Trauffler said. “I tackled her this one time and the ball got away from us. We were both running back and she had turned to face me. I went for another tackle and I planted [the foot] wrong, and my knee collapsed.”

The trainer said she only suffered a sprained ligament and Trauffler was able to complete the match, but she knew something more serious happened to her knee. A week later, an MRI scan confirmed the worst: a torn anterior cruciate and medial collateral ligament. Trauffler was told she would take eight months to a year to fully recover. Her season and her chance to compete in the college showcase were lost at that moment.

“When the doctor said I had a torn ACL, my mom started crying,” Trauffler said. “I was trying not to cry. When I got home, I just started to cry. I felt like, I’m going to be out for so long.”

Trauffer said it was the first time she had to miss matches because of an injury, but she never expected such a long absence. She used to spend hours travelling to training, practicing and then hanging out with her teammates after school. The injury suddenly gave her plenty of freedom, but the mental pain of not being able to play soccer caused her to fail to find anything fascinating to fill the blank.

“Soccer was what I looked forward to after school every single day,” Trauffler said. “I was able to get all of my energy out and work as hard as I could non-stop. The first week after surgery, I tried to go to the bathroom and my knee couldn’t bend because there was a big cast that was straight and I couldn’t go to the bathroom because I couldn’t sit. This is going to be awful."

“I didn’t have to go to practice. I had so much free time but it was just a lot of finishing homework early and kind of sitting in the bed, watching TV or doing whatever. I think I was more depressed about not playing soccer rather than doing anything new.”

Jenna wasn’t the only Trauffler to suffer a torn ligament as her brother, Ryan, tore his ACL on three occasions. The Trauflers knew what to do to help her recover as fast as possible and she was quickly setup for rehabilitation.

Jenna went to the same therapist that helped Ryan two days after the surgery, where she committed to attend three times a week. A regimen was quickly established. The first month, she did stretching exercises to regain the ligament’s usage. The next five months were spent building the ligament’s strength and getting back the muscle memory. She started to practice with the ball two months ago, and she is hoping to be cleared to return to full practice in time for the preseason. Through the process, her teammates and coaching staff checked up on her often.

“A lot of my teammates came and they bought me stuff and signed a big card,” Trauffler said. “My coach was checking up on me and text me and asked how I was doing all the time.”

Although her family provided her the resources, her brother was the barrier between Jenna and the recovery. Ryan re-injured his ligament minutes after his return. Although Jenna was determined to not let history repeat a sibling later, the bad omen hanged over her head.

“I originally I planted the foot wrong, and that caused me to injure myself,” Trauffler said. “When I ran for the first time, I felt like I could have planted wrong and reinjured myself just by running.”

“The first thing I thought was, I’m terrible. My touch is going to be bad,” Trauffler said. “After the first couple of times, it wasn’t that bad."

Trauffler declared herself ready to be back in action after that session, but her mother and her therapist advised her to take everything slowly. In August, she will be ready to return to full-time practice, just in time for the pre-season period. Trauffler will restart the process as the U-17 DA kicks off the new season in September. As a high school junior, she still has plenty of time to improve her college recruitment. With the injury behind her, Trauffer is focused to return better than ever.

“I’m lucky that with my parents and everyone else supporting me, I was able to go to therapy and have a personal trainer,” Trauffler said. “I am super grateful that my parents paid for that to help me get back. I’m motivated and excited to get back to do what I love.”