Cezar Onut, who currently plays for the U17 DA Boys visited Romania during the summer time period.  Besides all the activities, lots of fun and meeting with all his old friends, he attended training sessions with the U16 Boys Romanian National Team (Head Coach Adrian Vasai) for 3-4 days at the National Central of Federation Romanian Fotbal.  After this camp, the U16 Boy's team traveled to the north of the country, visiting the cities of Suceava & Vaslui where he had the opportunity of playing two international friendly games against Republic Moldova National Team.  Many of the players that attended the FRF Camp were currently playing at a very high level in different countries across Europe.

During the summer time period he also had a great opportunity to train for a week with one of the best Youth Academy's from Romania called F.C. Viitorul Constanta.  Gheorghe Hagi (the owner of the club) was very impressed with Cezar's performance and attitude. Cezar then completed his trip and trained with F.C. Petrolul Ploiesti for his final week.  Ploiesti is Cezar's hometown and he had chance to meet up with his old teammates and to train with his first coach at Petrolul Ploiesti called Coach Marius Manolache.

The club asked Cezar a few questions regarding his trip to Europe:

Q.  What did you enjoy most about your trip to Romania and why?
A. It was an unbelievable opportunity for me to travel to Romania after I left my country five years ago.  I was very excited to see my family, friends and mostly playing for the Romanian National Team because it has always been one my dreams to play for my country.  I have to continually fight, sacrifice and work hard to achieve my dreams.

Q.  What were the top five take-a-ways you took from the trip?

A. For me, soccer is so much more than a ball and playing games, it connects me with players from all of the countries of the world and learning one from another. The soccer provides many emotions and a different feeling every day wherever you live and train to become a great player.

Q.  How did training in Romania help your preparation for the Development Academy season starting in August?

A. I attended many practices where we did a lot of physical tests that helped me to be prepared for the DA team and hope I can help the team out on the field of competition to succeed.

Q.  What is the main difference training in Romania vs. the United States?

A. One of the main differences between Romania vs. United States is that the teams are training 2-4 hours per day and do a lot of fitness.

Q.  What did you learn from your experience that will help your team this coming fall season?

A. I learned to be more aggressive on the field and doing a better job of defending. 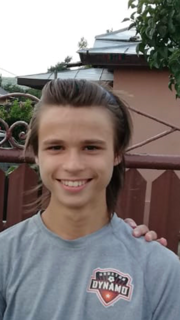 "I am very proud to represent Houston Dynamo | Dash Youth Soccer Club along with playing two games for the Romanian National Team and to continue my development as a player at this awesome club. Every season is a new challenge to me and I am very committed to continually improve my playing performance for the 2018-19 season."  Cezar Onut, U17 Boys DA.