Former Houston Dash (Texas Rush) players Emily Alvarado (Texas Christian University) and Kimberly Rodriguez (Oklahoma State University) recently came away with a victory vs. U20 USA WNT in the title game of the 2018 CONCACAF Women’s U-20 Championship in penalty kicks by a 4-2 scoreline in Couva, Trinidad & Tobago (Jan 28).  It was the third meeting between the USA and Mexico in the championship game of this tournament and the first time Mexico has come out on top.

Emily had a very crucial save in the penalty shootout. 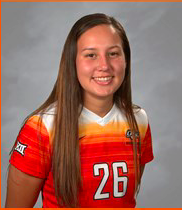 Kim Rodriguez played the duration of the game.

“Given their attitude and work ethic in their time with our club, it is no surprise to see Kim and Emily go on to achieve success at the international level.  We are very proud of their accomplishments.  They are great role models for the younger Dash players who are following in their footsteps.”  Andrew Squire, Girls Development Academy Head Coach.